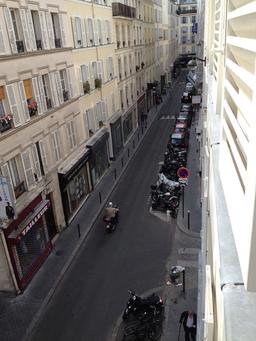 The view down our "rue"

I was awakened this morning at 7 a.m. by the sound of sweeping. Wet sweeping. Like someone was trying

window. A man in a bright green vest—the standard uniform for Parisian city employees—was dragging a

plastic-bristled broom through the leftover rain water to encourage its flow into the overloaded gutters.

You might be thinking, "How nice that Paris keeps its streets so clean."

I was thinking, "Why the F is someone sweeping right below my window at 7 o'clock in the morning?"

Not to mention that it's going to rain again today anyway.

Paris does indeed keep its streets clean, but it does so by sending all kinds of loud and cumbersome

paraphernalia down its tiny, quaint streets at all hours of the day and night. Our garbage is picked up at 11 p.m.

every night (and often at 8 a.m. the very next morning) by a truck so large it barely fits down the narrow corridor

that our windows look onto. That's right: every night a cranky, clanging machine squeezes its way down a

street that is, at best, a skinny, one-way side street.

Which brings me to another, noisy point. Because the road is so narrow—and because there are so many cars in Paris, much like in America—any time there's a delivery truck, a work truck or (Heaven forfend) a taxi parked in the road doing its business, the other cars that get trapped behind it don't wait patiently for it to move (since the only way out would be to illegally back up or drive up the walls like some kind of vehicular Spiderman). No, instead—at all hours, may I remind you—the waiting car will lay on its horn until the offending driver has scrambled back into his vehicle and trundled off down the road. Irritating, to say the least, when you're trying to get work done three floors above. It's a downright mind-flogging when this happens at 2, 3 or 4 a.m.

And then you've got the revelers from the bar down the street strolling under the window, talking at the top of their lungs, when last call has long since passed and they're toddling home for the night. On a Tuesday. At 3 a.m. Or the American tourists—the accents give them away—laughing hysterically as they teeter back to their hotels (there are at least three on our street). Or the man who owns the restaurant downstairs who I'm convinced is part hyena (his laugh rattles the ears and​ the soul).

But there's one particular character in this frenzied, cacophonous fable that stands out (and in fact inspired the title of this post). At several times throughout the day, one of our neighbors clip-clops her way down the street in what must be very high heels, as it takes her forever to get from one end of the street to the next. Clip-clop, clip-clop, clip-clop, clip-clop...My husband and I had casually remarked upon her daily treks to one another throughout the weeks we'd lived here until finally one night, lying there with our eyes squeezed shut, trying to fall asleep, the clip-clopping​ echoing off the bedroom walls, Joshua muttered, "Get there..." As if his utterance would hurry her along and let the ringing in our ears subside.

It was so apt that we now use the phrase anytime a particularly offending sound—giggly tourists, late-night lovers, impatient drivers—is making its way down the street, the walls and windows of Rue Augereau magnifying the reverberation like an urban Grand Canyon.

Thus, at 7 a.m. this morning when the swosh-swosh-swosh-swosh awoke me after having barely fallen asleep due to the rumbling motorbike that had started up at 6 a.m. and idled for at least 20 minutes directly below our window (I imagined its owner needed to send a Very Important Text before driving to work), all I could think as he made his slow, deliberate, brain-meltingly noisy way down the block was, "Get there..."

He was gone by the time the garbage truck came at 8.